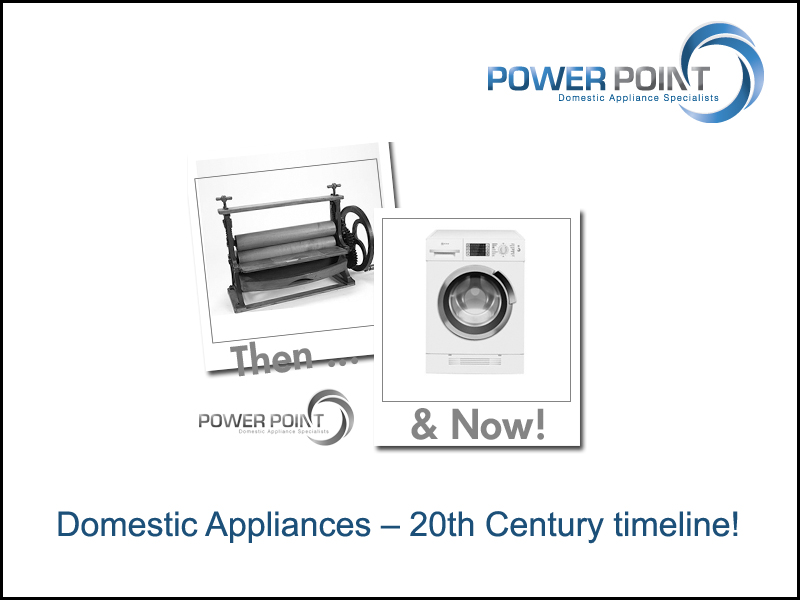 an empire and none of Manchester United, Liverpool or Arsenal had won the First Division Championship.

A great deal happened in that last century, not least in how domestic appliances in the home changed the way we live, freeing up hours of time otherwise spent cooking, washing and cleaning.

Here are a few of the highlights from the progress of domestic appliances in the 20th Century.

1901 – Engine powered vacuum cleaner.  This device was powered by an engine mounted on a horse-drawn cart and workers reeled hoses into the buildings to be cleaned.

1903 – Lightweight electric iron.  Following complaints that it heated up too much in the middle, the designer modified the iron so that it had more heat in the point, making it more useful when ironing around buttonholes and the like.  People liked the ‘iron with the hot point’ and a famous trademark followed.

1907 – Domestic vacuum cleaner.  Janitor James Spangler’s original invention utilised an electric fan, a pillowcase for a filter and a broomstick for a handle.  He sold the rights to a relative, William Hoover, who made some important adjustments and revolutionised domestic cleaning.

1913 – Home based refrigerator.  The original primitive machine was soon superseded by versions which used toxic gasses as refrigerants.  Poisonings and explosions were not uncommon until a new system was introduced in 1929.

We can’t promise to repair all of the appliances described above but we can certainly cope with more modern ones!  For repairs, sales, service and spares for all your white goods throughout Gloucestershire, contact the friendly team at Power Point on 01452 730874.